My last blog post was on the eve of travelling to London where my
Gamesmaker volunteer duties started as Team Leader for Event Services
EVS at Royal Artillery Barracks RAB for London 2012 shooting. I’ve been a little busy since then, but back home now after an amazing experience.

Upon arrival at my old schools friends house who kindly allowed me to
stay and house sit for the duration of the games I pinned my shift
roster onto the fridge where it was joined by another lodgers Sara who
was working at the hockey arena. This would be the last thing I looked
at each night and first thing in the morning to remind me of my shift.

On the Friday before competition started those on the Saturday shift met
at RAB in full uniform for the first time for a final training and
orientation of the venue as shooting was to be the awarding the first
medal of the Olympic games in London, so we had to be prepared and ready
for action from the 4:30am start on Saturday ! 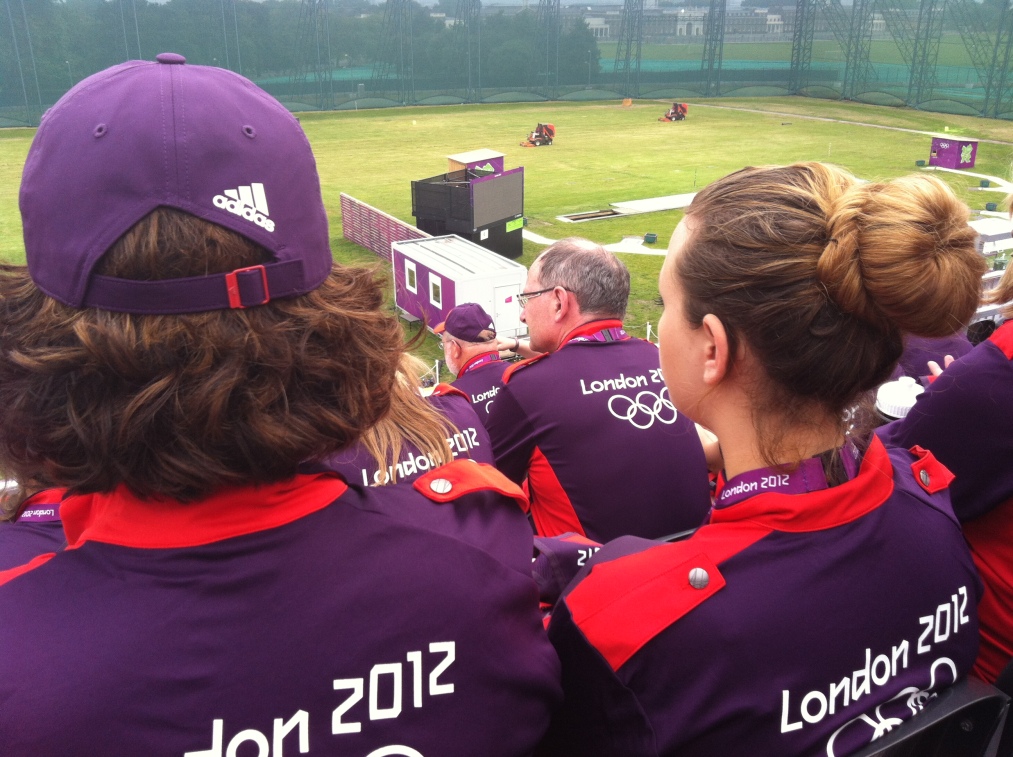 We walked what is know as the Last Mile, from station to venue and met
the big pink finger & vest gang known as Last Milers, there was also a
contingency route in case of incidents, new pedestrian crossings were
being installed and the whole mile route was covered by CCTV all lights
and crossings controlled by the Last Milers control station – big
brother watching us all – no texting, talking, eating or smoking on the
last mile ! 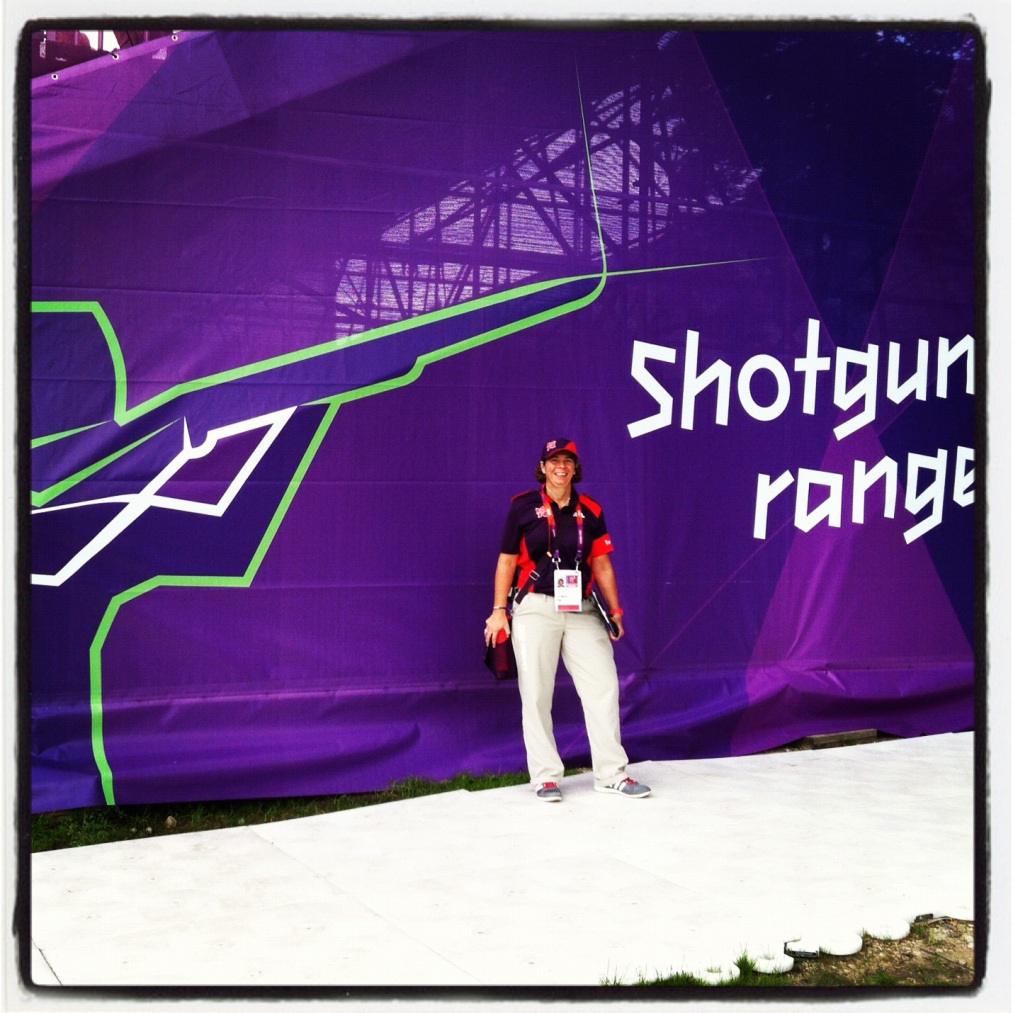 Then into the venue where we toured the ranges, checked out exits did a
couple of evacuation drills from Finals hall and shotgun range, had more
radio training on etiquette, phrases, codes and protocol and a chance to
get to know a few more Gamesmakers names & faces. There was 195 EVS
staff at RAB and we were supported by WISE stewards, the army for
security entrance and armed police from Fife to Dorset and every
constabulary in between. With upwards for 600 guns on site at any one
time I reckon this was one of the safest places to be !

We were sent home at 4pm as in 12 hours time we would be back for our
first shift and the London 2012 Games would begin :-)I managed to stay
up until the J countries cam in Jamaica & Japan then off for a few hours
sleep which came easy after a glass or 2 of bubbles. Most people were
either sleep deprived or still tipsy when we arrived the next morning!

Saturday 28th July at 4am was a beautiful day, a little chilly as I set
off down the hill to RAB. The routine and venue were similar each day
but our teams of 20 to 30 varied each day and often during the day. We were greeted each day to a different military band who played at 9am, 12 and 3 o’clock. The
army met us with a smile everyday at check-in at work force entry where
accreditation was scanned, bags screened, bodies scanned and all liquids
watered the grass outside. After listening to some of their stories you
know why they were so happy to by working the Olympics than being posted
to war torn countries. They did a great job and they should always have
been considered the first choice. 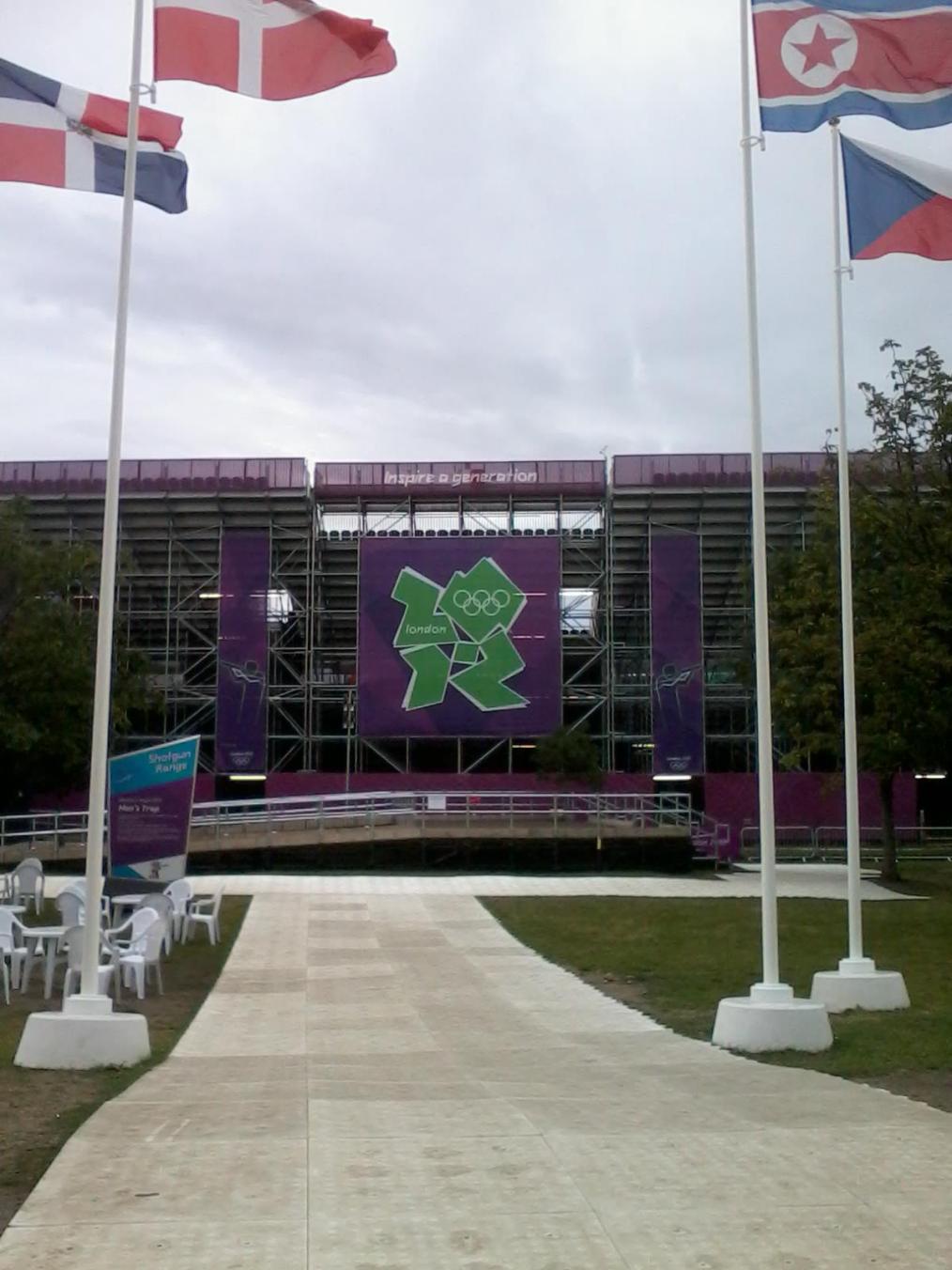 Once through the army security we checked in for our shift, got meal
vouchers for the day and our loyalty cards stamped and received from
sponsors a variety of gifts such as pins, cookies, scarf’s, flapjacks,
diaries, a souvenir baton and certificates. You also grabbed a bottle of
water and a poncho – just in case !

The other happy workers were the security sniffer dogs running the
perimeter tails wagging and boundless energy. Human Team leaders met
with the Stewards in the spectator lounge where locations were handed
out, I managed to work in the Shotgun range for 90% of my time as this
was the most interesting to me and as the only shooter the other leaders
were happy for me to be there and answer questions, also it was the
biggest area and so the hardest in many ways. Other ranges included the
10m/50m range, the 25m range and finals hall, also we took turns
covering ticketing/entry, last mile duties and circulation within the
venue. 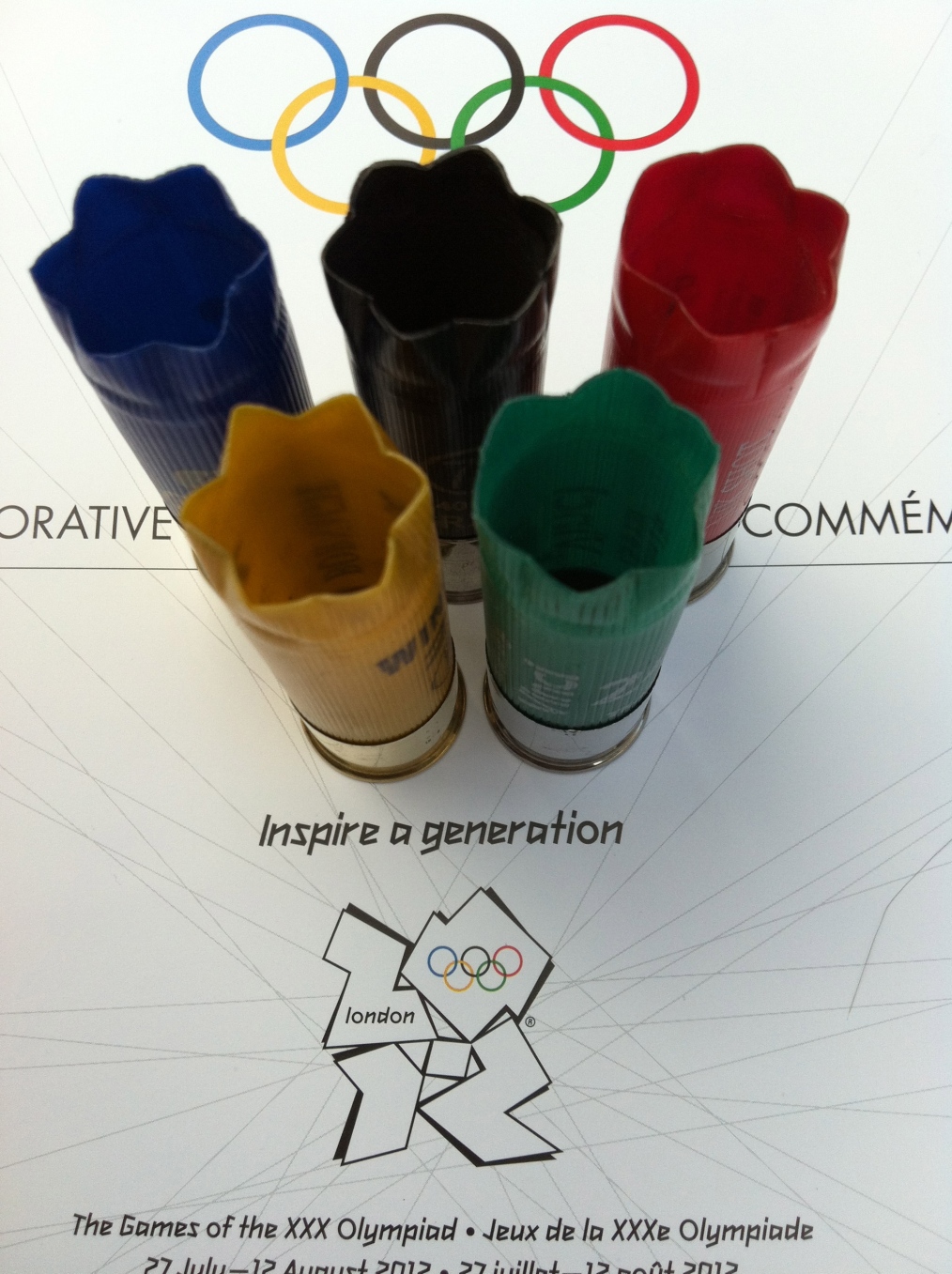 We were on schedule and the RAB awarded the first medal of the games, we
had many VIP’s and members of the Olympic family in attendance so even
more secret service, armed guards and guns. The venue was buzzing. After
each shift team leaders met for a de-brief which were acted upon and
each day new items arrived as suggested such as a giant live screen,
200 chairs for lunch, signage boards with daily events & finals, more
ear pieces for radios as hard to hear over gun fire, ear defenders &
ponchos etc.

The team spirit was great and after just a few days you get to meet most
of the EVS team split across customer service, mobility and information
points, as Gamesmakers we were promoted as the face of the games and we
did the country proud.

Purple & scarlet uniform was a point of discussion at many training
events, however once we were wearing it we soon realised how well
designed it was, it was comfy, quick drying, practical, easy care and
distinctive. We soon loved our uniform and the attention and praise it
attracted. The shoes were so comfy I wore them for nearly 3 weeks and
must have walked hundreds of miles in them. Like minimalist barefoot
shoes. Also your ever present accreditation which had to be worn at all
times by everyone, but no exceptions, even Seb Coe was asked to show his
and because he didn’t have right code was asked to leave the field of
platy at shooting ! He did so quickly as his rules. I don’t know how
with accreditation lanyard, a radio ear piece, ear plugs and bag I
didn’t strangle myself !

Workforce Break area, behind the scenes was a hub of activity,
community, friendships and good food. We were treated to endless tea&
coffee, Coke Cola soft drinks, fruit bowl and Harvest Crunch bars. Also
hot breakfasts, a choice of 4 hot lunches and the larges sandwich &
salad range I’ve ever seen all made up fresh on the premises daily.
Really good quality food and ingredients and plenty of it – armies
working on their stomachs. The groups of uniforms included the
Gamesmakers, Army, Police, Medical and stewards. No civvies clothing in
here. We all mixed together eating, drinking chatting and catching up
on live Olympic coverage that was being streamed throughout the day.

Another interesting hub was the Media centre, whilst all the images were
the same from OBS the languages and presenters changed, there was walls
of TV screens in excess of 50, hundreds of internet connections, it was
a digital feast.

I was soon accepted in the local community and every night when
returning from RAB neighbours who hadn’t talked to Sue & Justin in 16
years chatted away to me like and old friend, offered me lifts up the
hill and even a glass of wine in the front garden. I also frequented the
Woolwich Live site where I watched the Olympic action on the big screen
but mainly went for the Jamaican food stall. Walking up and asking for
ackee & saltfish with rice & peas I was told there was a lady who knew
what she wanted, and after confirming my Jamaican heritage I was the
greeted each day as ‘The White Jamaican Sister’

RAB only had 10 days of competition, was open for 11 but they all went
with a flash. I was lucky enough to get tickets for equestrian and the
velodrome as well as attend the triathlon and 10k swim in Hyde Parks so
got a chance to meet and talk to many other Gamesmakers – my Gamesmaker
shoes and watch were a give away. We really had 5 star treatment at RAB
from break areas, medical, food, access to live sport, community feel
and great mix of personnel to meet with. Also we ranked highest venue in
mystery shopper Gamesmaker research on the 2 occasions it was done.

The team of Gamesmakers were enthusiastic, motivated, happy and
professional from start to finish, the training proved itself and from
the first morning of stepping into the unknown it just clicked and we
all knew what to do, what was expected and how to do it, but we beat all
expectations, adapted as required and thoroughly enjoyed the journey.

One lunch break I was lucky enough to bump into Peter Wilson who was
showing Seb Coe around the venue, Seb shook my hand and said “Thank you
to all the Gamesmakers, you are doing a wonderful job” – the pleasure
was all mine Seb, thank you and LOCOG for getting the games in London. 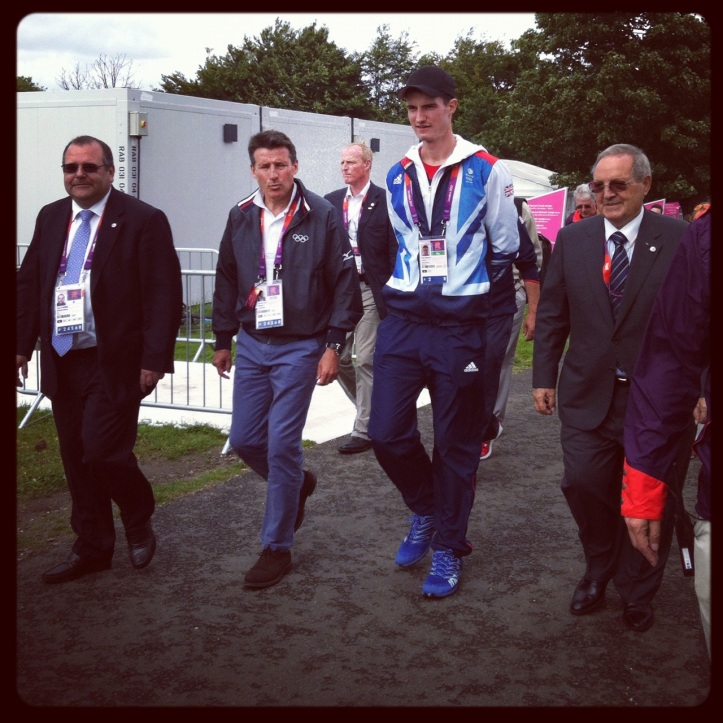 I also managed to get my hands on some shooting medal bling – gold &
silver, they are very large and heavy. My creative streak collected by
accident spent cartridges in the colours of the Olympic rings and
retrieved 2 of Peter Wilsons Team GB spent gold winning cartridges from
his last round in the final. Great souvenirs to top off the experience.

I found 2 other fellow shotgun shooters, both female, Sam & Marcia, we
enjoyed catching up at breaks, over dinner and drinks and Marcia managed
to get the 2 of us into the Press box for the last shooting final. What
a view of a nail biting event, 6th placed qualifier got Gold, 5th place
got silver and 1st and 2nd place going in had shoot off for bronze. A
real turn around in 25 shots.

Then before we knew it it was the RAB wrap-up party, well attended, more
food than we could consume and a real party occasion.
Uniform washed and ready to go home, shoes & Swatch continually worn and
we got to enjoy the final days of the games and the closing ceremony
with no more 6am start.

It was an absolute blast and I loved being part of London 2012, happy to
make it happen.