The Eskimos or First Nation people have over 100 words for Snow. Whilst in Canada last week I think I identified half a dozen different kinds of snow.

Stepping from the prop plane which was so noisy my ears were still ringing and the hairs in your nostrils instantly froze and a sharp intake of breath stabbed at your tonsils. A soft thin blanket of Dusty Snow covered the grassed areas between the runways and surrounding the airport. From the air this was enough to brighten up the otherwise mucky salt crusted roads.

Our first breaths of very dry Canadian air were fresh and exhilarating, Kamloops is only a very small provincial airport so not flushed with aviation fuel.

The transfer to Sun Peaks Resort was as bumpy as the prop flight in. Stopping within 5 minutes as the indicator lights stopped working. Quick drive into the workshop revealed they had frozen, our first of three freeze related mechanical/electrical problems. The 32km switchback drive up to the resort was not suitable for those with any kind of back issues. At the first drop off the bus was surrounded by cars flashing their lights and waving at the back of our bus.

The jolting had caused the ski locker mounted at the back  door to open and a ski boot bag had tumbled out and bounced down the hill for a few meters. Luckily a car swerved to miss them, picked them up and brought them onto the bus much to the relief of the owner. The ski locker door slammed firmly shut.

After carefully arranging the bags, boots, skis and snowboards in hotel and drop off order all was now tumbled around as if on a full spin cycle. So the driver suggested one stop off at our hotel which was on the middle to off load all bags so we could identify and collect our own.

As the locker door opened I was quite shocked to see my snowboard bag fall out, especially as it had been packed well inside the locker as a fourth drop off – that was lucky.

Bags dropped off in the room we enjoyed the mountain view but wanted to get out into the village. Dropping my Snowboard off for a wax & edges pamper session we stepped out of the hotels ski in/ ski out door to an even sharper intake of breath. Even though we were only at about 1000m elevation Canada’s interior and especially British Columbia were experiencing a real cold snap. Current temp minus 23c

The dry snow squeaked and creaked as we took our first steps on the snow. The relative humidity was very low causing us to drink litres of water everyday so that your skin and lungs didn’t dry out like an old chamois. The brightness was blinding and we were surrounded by walls of snow. The village clock tower was the second casualty of the Baltic temps with only one on the leeward side showing the correct time, the other two faces were frozen in time literally.

Sun Peaks Resort is a village surrounded by three mountains providing a variety of terrain for all. The snow base was good, the grooming exceptional and best of all we had bright blue skies for the majority of days. The first two days we explored and cruised the three mountains, very relaxing, no lift lines, majority of slopes we didn’t see another sole as we slide and skied our way around.

Then big fat fluffy popcorn sized snowflakes came at night and gradually eased to pea sized flakes just as the lifts were opening. The skies opened up blinding us once again with the perfect sight of fresh powder. I was up an out getting dressed and grabbing my board like a dog running into a butcher shop. POWDER DAY I was grinning like a goon as I ran out.

Now these days are meant for snowboards, the poor skiers finding it harder to push through the fluffy stuff as us boarder just float along. I had one face plant in the fluffy stuff as I exited one of many amazing glade runs. They say no friends on powder days, well that’s partly true. I was leaving Mike behind on his skis but when dropping into the trees I tagged on with other boarders or they joined me so we rode with buddies and looked out for each other – counted numbers dropping in and then at the bottom. Just as we paired up at the top we peeled off at the bottom and chose a lift and another trail and repeated the informal buddies system again. This was my longest day of riding and oh was I knackered that night !

Icy Velcro was the next type of snow I encountered. As the temperature rose the snow continued to fall. To us it looked like regular snow but the locals called it ice rain. It was still around minus 15c but the humidity had risen and the falling snow created a number of issues.

First it created an ice layer on the outside of the goggles frozen as hard as drops of superglue on the lens. Licking, rubbing, blowing, wiping did nothing to shift it. The only solution was to lift the googles and descend as far as you could before your eyelashes froze. Defrost and repeat.

As most lifts were fairly empty Mike and I got to share most 4 man chairs to our selves. So as always I straddled the restraining bar across two seats and rested my snowboard across the T-bar foot rest. The base of the board facing forward into the wind and snow  ice rain. Unbeknown to me the base froze and as I placed it on the exit ramp at the top of the chair lift the snowboard stuck like Velcro to the ramp. The lift operators were alert and stopped the chair, I was the umpteenth boarder and one few skiers who had tilted the base up and stuck to the snow.

A boarder came over to me and said flick your base up, he then chipped off the ice that had built up and explained the problem. Saying to tilt the board base down on the lifts until the snow rain had cleared.

Our clothing also was affected, the snow ice rain soaked it but the low temps then froze it so it turned as white as if we had been sprayed by a powder fire extinguisher all over and the fabrics crackled and creaked as we moved. Luckily this snow ice rain only lasted an hour and the humidity dropped, temps rose and the snow petered out giving us bright blue skies again.

Saturday night is hockey night in Canada, we had tickets and transport to see Kamloops Blazers play Calgary Hitmen. This time we encountered street slush snow. Where salt and tyre treads compress and break up the surface snow. Mounts of mucky snow lined the main roads in the town and along the highway.

So to finish off our holiday at SunPeaks with it’s varying snow kinds was brilliant. I nearly kept my promise to my triathlon coach, said I’d keep out of the terrain park and double black runs. Well after the snow dump of fresh powder a double black was too inviting 🙂 it was challenging but so rewarding and when I got the the bottom. Then I was happy to leave it with just the one adrenaline run. After all this is the year of ironman, not snowboarding especially as I didn’t make it to the Sochi Olympics !! 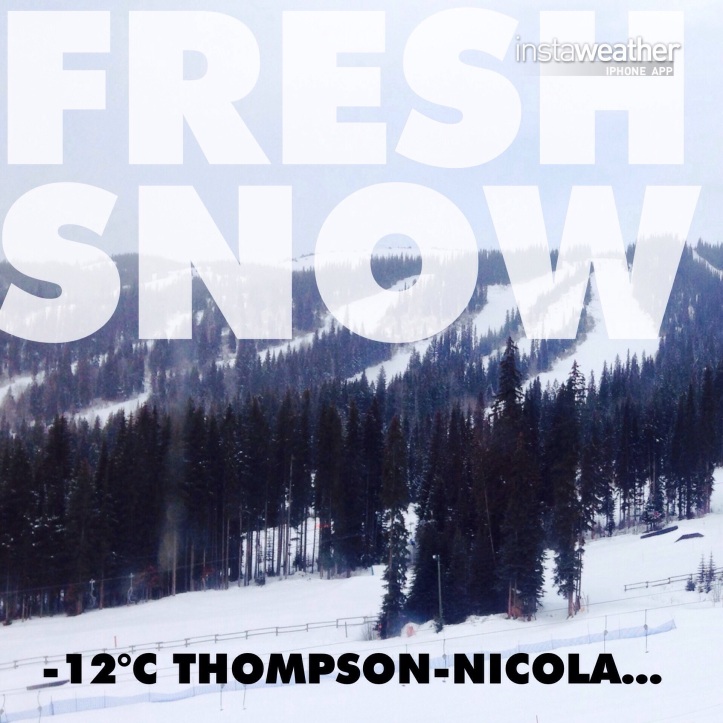