Another varied week included two first shoots of the season, a 5k run with Megan my dog, went Go Ape, Netball, Badminton and confirmed I’ll be running inside the Olympic Stadium in 2012.

Got Megan back into the harness after 18 months  since she was poisoned. We did a local 5k run acting as sweeper, good job we weren’t racing as we had a poo stop, two wee stops and a dozen stop & sniff stops ! So first race in series we were 29 mins – can only improve.

First shoot of the season at Charlcutt and it  was a cracker. Invited as guest on Sunday so nice surprise. Honoured to get first bird of the season and a quarter of the bag off ten guns. Not bad for only girl on shoot ! Second first shoot at Stanley on Saturday, walking those hills for the first time was a wake up for dormant leg muscles – really was great cross training.
Went to Go Ape with my brother-in-law swinging, climbing, zipping through the tree tops in New Forrest. Scary at times but great sense of achievement when we finished together after 2.5 hours in the trees.

Slightly distracted in netball training with the spectacular lightning storm all around us, flickering lights did make shoot for goal a little tricky.
Only two of us for Badminton so even more of a social game than normal, but still got a sweat up so hydrated down the pub later !
Friday I received an email saying I’m confirmed in the Olympic Park Run in 2012. 5 mile run around the Olympic Park then we finish inside the stadium on the actual track ! We’re allowed 2 spectators to go inside stadium and watch us cross the finish line. 5,000 places available through the ballot. 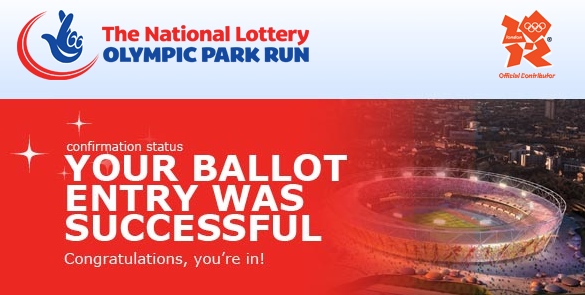