You are an OUTLAW – my only talent is I don’t quit.

On Sunday I completed my second long distance triathlon, but it was my slowest 140.6 miles and hardest race of my life.

This was my A race of 2016 but on the day my ambitions of a sub 14 hours or PB were dashed three weeks before race day by a bronchial chest infection.  I was washed out and laid up in bed for two weeks allowing a week taper where I managed two yoga classes, a massage and a short ride to ensure my new cleats were in place.  This was second bout of bronchitis this year, I suffered back in April after my training camp in Mallorca.

Race day was tough, very tough and at 136 miles I was on the edge of quitting. “Just a Parkrun to go you have two hours, you can do it” were the shouts from my team mates and commentator. With feet on fire from two huge blisters on the balls of my feet from walking in wet shoes for 12 miles I was escorted around the lake at Holmes Pierrpont by Seren & Ghost, pirate shipmates. They did their best to entertain me and keep my mind off stopping with singing, skipping, talking horror films and litter picking. It took everything I had to dig deep, mind over matter for that last 5km was the longest I’d experienced.

The support from the Pirates on course and supporting was the tipping factor that got me to the finish tape. They invaded the red carpet and gave me a heros reception, arms aloft whoops, cheers and applause eventually after a very very long day I walked across the finish line in 15:53:07

Race day just didn’t go to plan and do justice to my training. Before bronchitis I was confident in my training having completed a 2 mile open water swim in an hour, 100 miles cycled in Happy Land under 6 hours and comfortably ran 16 miles non stop at 10:30 pace.

I was looking forward to Outlaw as just two lengths of the rowing lake, fast and flat bike & run routes and single location compact transition. I was hoping to match my relay teams time from last year at 13 hours 55mins and felt this was doable with training completed.

So what happened on my longest day ?-

Swim 1.4 miles A beautiful sunrise greeted us but did made sighting a little tricky. Just two lengths up & down the rowing lake. Positioning myself near the front of pen 2 for 65-75 min swimmers as last year I was at the back of pen 1 and was swapped by pen 2 swimmer cutting across.

I had a good start, keeping on inside of the buoys there was clear water to be found. Half a kilometre in a speed boat flashed past which swamped me in its wake, cue first of many coughing fits. I stopped, spat out as much water as possible and carried on. The out length seemed to go on forever as my chest tighten and a couple more coughing stops before the turn. The width was more crowded and a few elbows clashed but nothing too bad. As we turned the final buoy we had the sun behind us and it was a drag race to the tower exit. Whilst I’ve mastered being sea sick and continuing to swim I can’t say the same thing about coughing & swimming, it stopped me half a dozen times mid stroke.  A couple more coughing fits and a helping hand was grabbing me on the ramp. Through a shower and I looked at my watch 23 minutes, ten more than I hoped for and down 5 minutes on last years swim.

“Sit on your bum” shouted the strippers, then after a tug of weed around my timing chip my wetsuit was off and I was in the change tent, grabbing my correct bag this time unlike Exmoor I went into a virtually empty women’s change area for space. With a gritty bum & back from sitting on the floor I tried to brush it off as could have been sore after rubbing for 112 miles. For some reason I just couldn’t get my left cycle shoe on, four attempts at this simple task ?? Cycle jersey, helmet, sunglasses & gloves on and I trotted out to find my bike.

Bike 112 miles – The sun was up and temperature rising, perfect cycling conditions. This was made up of three loops, 2 of south whichever as quiet country rolling roads and one of the north loop which was a bit busier and link road was an A road so a few more tricks, caravans and big vehicles. Most other traffic was fine but you got the occasion white van man blaring his horn and getting far too close to riders.

The first lap flew by and I was whizzing along nearly averaging 19mph. I was drinking and eating to plan – potatoes, peanuts, bananas, margarita BLOKS, Nak’d bars, sports drink & electrolyte. Happy Days 😀🚴🏻

Heading into the second loop the temperature rose to 28c then wind got up and I started to wheeze. Having to sit up off aeros to get air in my lungs my pace plummeted. Not sure if it was the wind, high temperatures or exertion that was affecting my breathing or most likely a combination and residual weakness from the chest infection. But my lungs were starting to protest and noticeably hindering my progress. Between loops we were on main A road open to a fair amount of traffic and the white van man tit who got far too close to a number of bikes. The third loop was blustery, miles 60-80 were hard going but I had the Pirate feed station to look forward to at mile 80. I pulled in for drinks, catch my breath, Jaffa cakes and a banana whilst receiving huge support & cheers from my team mates.

Battling the wind for last 30 miles I through we’d had the worst but that was still to come. Last two miles into transition we were reduced to a slow bicycle race pace unless you wanted to shatter your carbon beauty on the potholes and speed humps. Handing over my bike to catcher a glance at the watch showed 7:09, lost 30 minutes on my plan but ten minutes up from relay team last year so back on par with 13:55 finish.

A slicker transition with cap, shirt & shoes changed and again I trotted out heading for the run. Feeling OK.

Run 26.2 Just remember lake-river-lake-river-lake-lake this was the order and number of each of two loops required to complete the marathon. The sun still beating down on us around the lake laps, but a cooling breeze along the river was pleasant. Quick trip to port-a-loo under the scoreboard on first lap and still my fastest. Plenty of cheers from the crowd & ‘aaarrrggghhh’s from pirates and I was off and running. I walked through feed stations to hydrate alternating between electrolytes & Coke, occasionally grabbing a handful of crisps and a Jaffa Cake. All was good for first dozen miles although I knew I was off my planned pace which I now put down to the humidity and coughing.

Then I started to fade fast. My chest tightened and I was having trouble breathing. I cooled myself through showers and soaked my cap and face with sponges. I was reduced to a run / walk for a couple of miles then I was brought to a stop by my lungs. Catching my breath I walked a little then tried running again but soon brought to an even sharper halt in my tracks and frightened myself. I just couldn’t breath. The air was like sucking through a pillow.

Decision time – quit or walk ?  I decided to walk back to the lake. Running shoes are not really designed to walk miles in and with the heat, wet socks & shoes from showers and friction blisters started to develop. My feet were on fire and each step was like treading on hot coals. Soaking them or cooling in the lake would just add to the cause. I tried to run a few steps, this was actually easier on my feet but my lungs decided to remind me why I was walking. I carried on walking, at one point joined by a lady called Jo but I wasn’t much company as walking  and talking became impossible for me. We walked on in silence until she made dash for the lake loop as she wished me well and said I sounded like Darth Vader !

It was great to see plenty of Pirates on the run, some walking and going through their own pain and injuries others flying to the finish. Bizarre moment sharing the footbridge with a wedding party lead by bride & groom trying to get photographs without 1,000’s runners in the background !

I walked around the lake and adjacent to the finish I was on the verge of being broken, how could I walk any further my feet were killing me, I’ve never ever experienced blisters before and don’t want them again. The thought of another lap around the lake was soul & sole destroying !

A talking to by the Pirates, including one who shall not be named but I brought him to tears. You can do it, two hours on the clock and only 3 miles to go. I honestly didn’t think I would have completed without the support and being accompanied around the last lap.

This was the longest triathlon of my life, the toughest physically & mentally but I became an Outlaw with an hour to spare. The finish reception was the best ever and momentarily my firery feet were forgotten as I walked the red carpet to that finish tape. Arms aloft I crossed the line breaking the tape at 15:53:07

Those following number 193 on the tracker at home knew something had gone wrong, those supporting at the event could see the pain first hand. There are a couple of  photos that capture these dark moments but for now I want to look back at the good parts and forget the pain. You know it’s a bad day when your bike is only 9 seconds quicker than your run split. With 7 hour marathon this again is my slowest, if I continuously walked all 26 miles I may have been quicker than my run stop cough breath walk effort.

This wasn’t the day or result I expected or trained for, being over two hour past my race plan. It took me to new depths to dig myself out from. Plenty of cliques poured through my head, but mostly Chrissie Wellington in an AudioFuel workout of #NeverEverGiveUp.

Lessons learnt – when recovering from illness don’t expect too much from yourself, many wouldn’t have started so that was my first victory of the day. Then take it stage by stage and keeping moving forward at whatever pace I could. As coach Neil helpfully stated left right repeat !

Proud to be an Outlaw & Pirate. It will be a memorable day in its length and depth for many years to come for me.

Time for rest and recovery then when blisters allow back to training as I have Weymouth 70.3 in September before family holiday and being Sherpa and supporting Pirate championship in Mallorca. 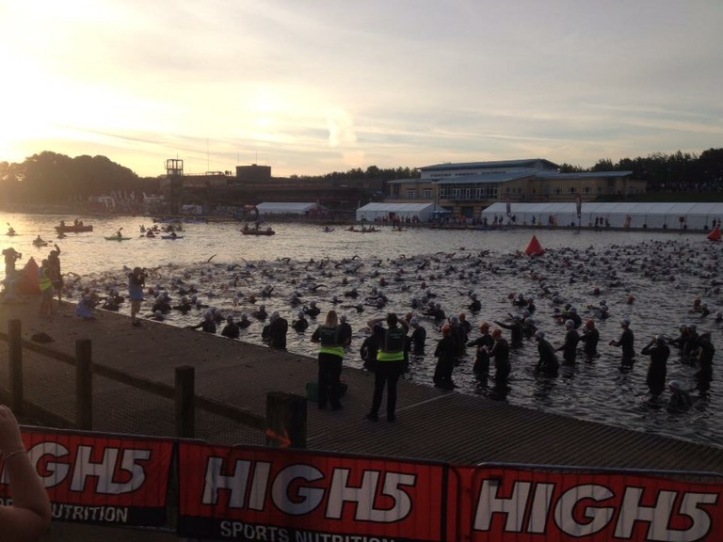 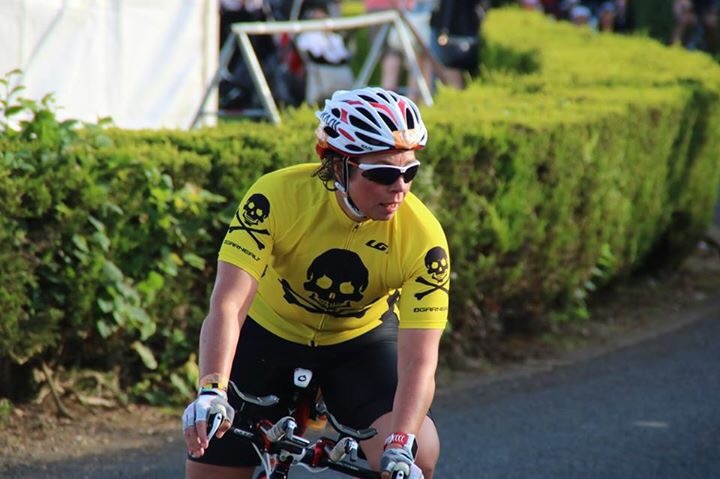 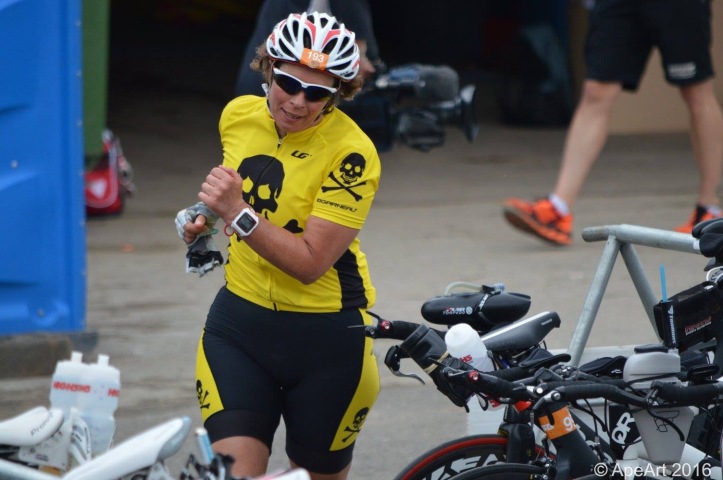 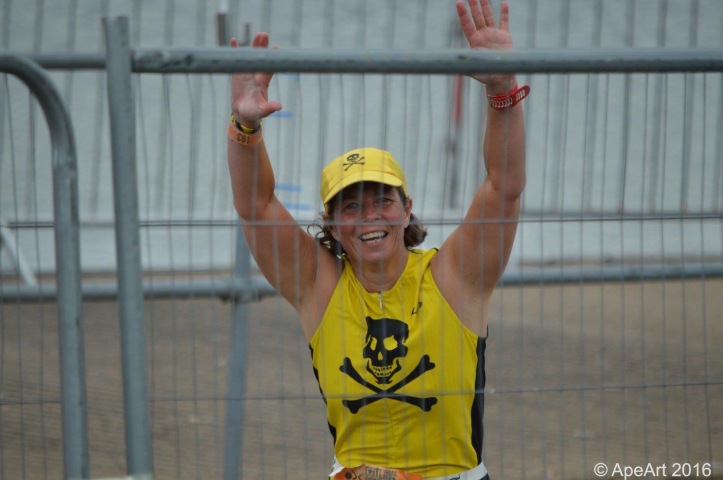 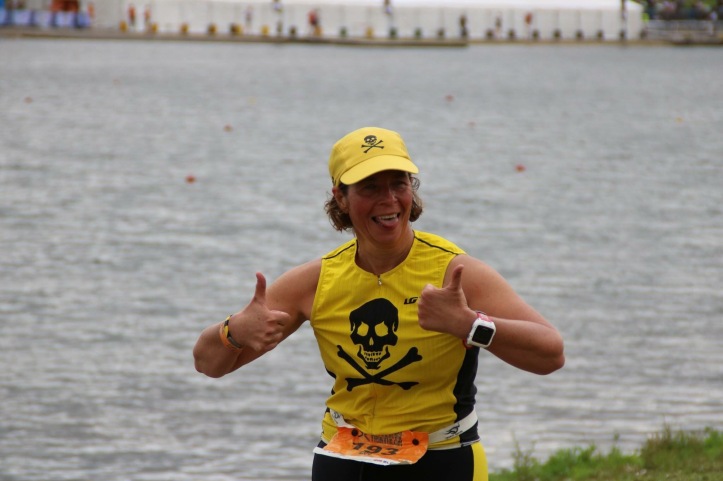 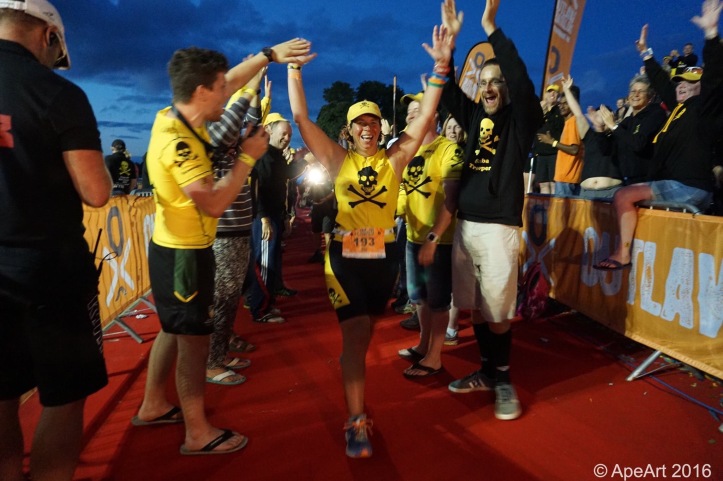