Mixing it up – Triathlons styles

This month I have been involved in 3 new formats of triathlon, mixing it up can be fun rewarding, challenging and different experience to our normal swim – bike – run.
Race 1 – LCW – three events over three days
Race  2 – ISOMAN, equalisation of activity time
Race  3 – Outlaw three events, three people in a relay
The Long Course Weekend, LCW is based in the beautiful town of Tenby and surrounding stunning Pembrokeshire area. The swim takes place in Tenby bay on the Friday evening, the bike rides are on Saturday and the runs on Sunday. These events are in plural as you can choose your distance. The long distance for each is ironman distant 3.4/112/26miles, there was also a 1.2 mile swim, 70 & 40 mile bike options and half marathon and new of this year a 10k run.
You could mix and match distances and do as much or as little as you liked. If you completed the long distance for all three activities you got and extra LCW medal to stack together at a special awards ceremony. 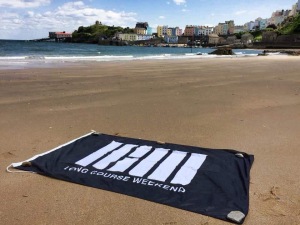 My LCW –
Swim – 2.4 miles in jellyfish infested waters and a good amount of choppiness, strong onshore current caused by relentless winds.
I was stung twice on my neck & forehead, speared a jellyfish with my index finger, stubbed a finger on a plastic milk carton, got a few punches at the first two buoys and swam over distance 2.8 miles, as it was soon discovered when the half distance swimmers came across they finish that the buoy near the lifeboat station was in the wrong place !
The first buoy seem to take forever to get to with the current and wind, also only seeing the tip of the triangle due to waves meant it looked further away too. Turning and swimming parallel with the shore I started to feel seasick 😦 Now it doesn’t take much for me to feel queasy with motion sickness, I’ve had to get off a canal boat tour in Amsterdam and swim along side my canoe in the Caribbean ! I was fine with the taste of salt water and even the jellyfish sting as used to them from my scuba diving instructor days, but then I could get under the water away from the swell.
The Aussie exit was a brief relief to be back on solid land, well sand. I saw a friend from Calne as we headed back into the water and set off again for lap two. Queasiness subsided on swim out against the current but again on the back straight it and my pre race nutrient  reappeared (sorry of reading this with a cuppa & biscuit). Focusing on the lifeboat station and trying  to  breath away from the support boat fumes I got clear water around this third and final buoy and headed for the big rock and finish. Starting to kick was a bad idea as it induced cramp. 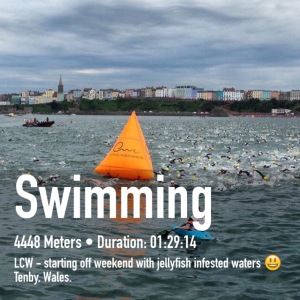 Apparently it poured down when we were in the water, but I just remember the sun setting behind the cliff top houses and blue skies when the coastguard helicopter flew by at the start and the flares went off to signal go.
A fantastic location, clear waters and the seeing the cliff face full of spectators created a brilliant atmosphere. Although I’m not sure sea swimming will feature in future long course races, need a rethink of my 2017 50th birthday ironman, can’t risk seasickness in a big race day.
Bike 70 miles – After a decent nights sleep on the camp site the middle distance cyclists had a lay in and luxurious 10 am start. The sun was out and temps were rising, perfect cycling conditions which just emphasised the beauty of the course. The first 30 miles were relatively kind and undulating, we got to ride along clifftops with stunning views of bays and then we dropped down to sea level and rode amongst the sandiness to climb back up and out to the next bay again and again.The last 40 miles were very lumpy and challenging.  Well stocked feed stations apart from the tropical energy drink, that was just vile and closed roads were a cyclists dream. I did get cramp on one hill and managed to topple over into some stinging nettles on the verge, soft landing but nice nettle rash to add to jellyfish stings.
Climbing the timed  Hill challenge a cyclist fell in the middle of the road in front of me  I had to haul my self out of the saddle to get around him, I made it to the top just passed the timing beam where my friend Deb caught up with me as I was draped over my bike trying to stretch my legs and receive the cramps. A third cramp stop in a driveway followed and some locals said I had half a mile the flat and the finish. Back on the flat I flew to the finish in just over 5 hours.
Fish & chip dinner, shower that stung as I applied shampoo and shower gel to my various stings, like lemon juice or vinegar on a paper cut – ouch !

Run 10k – I chose to drop down to the new 10k distance run as had other races coming up. We were greeted to rain and dark skies first thing, such a contrast to Saturday. Again closed roads and good feed stations were in place. The 10k started at Manorbier castle where we coached to and then huddled in the stone castle. Race briefing and the skis cleared, escorted about half a mile by a Zumba band to our start where we filtered in with the full and half marathon runners. An uphill start was testing then an undulating run again with some great views. As I was on the short course I took it upon my self to support the long course athletes so walked and chatted with many along the way. Still came in on the hour.

The common factor for all events at the LCW was every competitor came over the same finish line to huge volumes of spectators, a very special finish atmosphere. Locals and visiting supporters alike were out in force and volume. As we walked around town many locals stopped and asked  how we like Tenby, could they help and thanked us for coming. A friend of mine even got bike storage and accommodation from a  local after her logistics went tits up.
LCW really does have something for all whether you are a triathlete, swimmer, cyclist or runner, mix and match distances and discipline as much or as little as you like. Plus one of the most beautiful stunning settings you can wish for.
Next up was ISOMAN which I have written a separate blog post, this was where distances were adjusted so you spent equal time on each. I may not be fast but I was most equal half distance athlete with just 2 minutes difference across a 3.5 mile swim / 30 mile bike / 13 mile run. Also transitions were equalised and everyone was given 7 & 5 minutes.
A great event and the longer swim, shorter bike suited me as I managed to get a PB for a half marathon run, the warm conditions and flat course helped me for sure.
Outlaw, long distance triathlon – Relay team Pirates Ahoy
This would be my second year at Outlaw being part of the Pirates feed stations and finish line supporter until the 17 hour deadline. This year I joined Cake and Bookie to form Pirates Ahoy crack relay team.
Mars Bar – rum – Buttons Porta loo – rocking relay team 33 – Pirate feed station – pirates finish line support – rain – more rain sum up my memories of another awesome Outlaw weekend.

I feel rather guilty that I got the swim leg for Pirates Ahoy in the best weather of the day, ironic really !

Starting at the back of bay 1 I was shivering with Prince Siggy looking for a tow. What I got was a load of toes in the face and a full washing machine effect thrashing. It seems to get worse after 200m and was madness for another 500m as I watched the blue distance boards go past slowly between blows, kicks and duckings.
Enough – I then headed inside the red triangles and got clearer water for last half of out stretch into the blinding sun & swans. The orange buoys seemed to drift on the horizon for eternity.
On the home stretch I managed to swim along a line of yellow small buoys which I initially though was Siggys pirate swim cap.
My hands and feet were feeling the cold and starting to curl up, it was like I was doing fist drill. The blue arch finally came into view and I staggered up the ramp. Seeing a wall of yellow pirate tops I stopped and bent down to get chip but a helper pulled me up thinking I was about to head plant the concrete !
Chip finally pulled off my ankle I handed it over to a happy Cake who got to be first relay pirate to escape T1.
I went to grab my shoes and head back to campsite for a change into cycle kit and cycled to Pirate feed station at 16 /80 miles, with a stop at garage for a hot pasty & coffee as sun was disappearing behind clouds now.
The Pirate feed station was as loud, fun, encouraging and just simply the best on course ! Even when the rain came spirits were high.

Cycled back to finish area as a drowned rat to support the runners in the biblical rain. Fair play to all hanging in there and finishing on this day especially those first timers and PB winners.
The liquid sunshine in the guise of Jamaican rum came out and all was good again.
Pirate Ahoys runner Bookie was on her way in and a rum infused Cake & Red Stripe escorted her down the red carpet – what a team .
Great weekend all and until next year where I may take on a bigger part of the proceedings of Outlaw.

I enjoyed all three variations of triathlon this month and would recommend then to everyone with even a slight interest in triathlon. Different events and challenges, mix it up, have fun. My learning points are – sea swims may not be for me due to seasickness, flat run courses suit me best especially with warm weather. You can’t control the weather so better keep training in whatever mother nature throws at you. Keep riding hills to get stronger on the bike. Don’t  use shower gel if you have jellyfish & nettle stings.