Last time I was at Outlaw was July last year where I lost the use of my lungs whilst having my first asthma attack. It took me nearly 16 hours to complete the 140miles. A few weeks later I was diagnosed with Exercise Induced Asthma.

I went back to Nottingham this weekend as a wheezy old woman ( asthmatic & new 50+age group) for my come back to triathlon race. My aim was to finish, enjoy the event and put to rest the memories of how tough last summer was and how I struggled to breath.

Spoiler – I finished 😀🏁 A tough race due to being blind in swim, rough roads & windy on bike then the sun making an appearance on the run.  My lungs held out to mile 8 of the run then needed assistance from Ventolin inhaler. This was only 70.3 miles how will I ever do 140.6 again ?

Driving up on Saturday in Mike’s new car I soon needed the wipers due to heavy rain ☔️ Managed to pitch the tent in a brief break from the rain and headed to briefing.

Met my old triathlon mate Vicki at briefing, we first met at Exmoor 70.3 & ironman Bolton in 2014. Organisers gave huge apology for the state of the roads as the winter had been harsh and 18 cans of spray paint used to mark the biggest dangers – can’t be that bad can it ? Oh yes.

At registration given the usual array of stickers, tattoos, swim hat, timing chip & optimistically sunscreen as the clouds burst and a huge downpour descended upon us. A sprint triathlon was still going on, poor people, very soggy.

Dinner plans changed as I hide in the National Water Sports cafe and had an early dinner to stay dry. Then 6pm on the dot the clouds cleared and blue skies for the night.

Race morning was dry with a brilliant sunrise at the bottom of the lake, the lake was chilly from rain the night before, no official temperature given but I guess 12-13c compared to lakes I’ve been swimming in.

Swim – I slipped into the water, wearing wetsuit & three caps including a neoprene swim cap. A few strokes to warm up and flush the wetsuit through and acclimatise. No brain freeze but my left goggle was leaking. I tried to readjust the straps & lens but still leaking – damn never done this before ?

30 second warning ⚠️ final faff and try to seal goggles to my eye.

Normally I’m pretty good at holding a straight line so relied on my limited vision & swim ability. We were off, straight into the rising sun. At least my leaky goggles were tinted, but visability wasn’t great above or below the water.

Within 200 meters the goggles were flooded with duck poo water, I tried to keep my left eye closed and sight with one eye. Luckily I breath mostly to my right so could still sight as I breathed.

After drifting into the centre of the race buoys I got back on course to round the buoy at the end, a short width of the lake and hundreds of duck & geese could be heard protesting we had woken them !  On the return leg visibility improved as the sun now behind us and the big red buoys were as clear as bonfires. Right now let’s make up some time Zoe, so I started to kick, something I don’t normally do and soon regretted it as I got cramp from buttock to toes ! I think the cold water was a factor in this. Stretch – release, swimming with one foot at 90degrees was more like an anchor dragging.

Up the swim ramp a helper held out a supporting arm as another offered to unzip my wetsuit. I walked along the double yellow painted lines as smoother to walk out final remains of the cramp and into transition. Pirate support ringing in my ears 😀☠️

T1 – I decided to put on a tshirt and long sleeve cycle jersey as air temp still chilly.

Bike – 56 miles of rough rough roads, then next day I had a sore sprained wrist from the pounding, bashing and bouncing along the atrocious road surface.  The first 40 miles I was averaging between 18 & 16 mph, then the wind got up and the roads deteriated even more. But I made it up Oxton Bank which I had to walk last year as couldn’t breath – ✅

Cursing the road surface knowing the last 2 miles was going to be weaving our ways through bomb holes, cattle grids and gravel my eventual average speed dropped to 11mph, s overall was 15.5mph I was aiming for 16mph+

T2 – desperate for a wee, at least I was hydrated ! Jacket off, running shoes on.

Run – the sun was out, the breeze off the river was pleasant. Just two shorter loops along the river and around the lake for 13.1miles. Aim was to take it steady, just another long run. I was wearing my heart rate monitor and HR was holding steady.

My lungs behaved until mile 8 when I need the help of my inhaler as becoming breathless, I dropped my pace and HR took on drinks at each water station and ran from station to station. Need a second wee stop – maybe over hydrated, not a bad thing apart from against the clock.

12 miles in and last water station & suck on my inhaler and I was heading for home. Came across Vicki and we decided to finish this race together.

Finishing is fantastic, finishing with a mate is Oarsum 😀☠️🏁

Swim-bike-run- beer 🍻 Outlaw & Erdinger beer its why I race here !

My aim was to finish, I would have liked sub 7 hours but as a come back race with its difficulties in seeing, rough riding, wind and breathing I can’t be too disappointed. Far from my best, but not my slowest time over this distance.

Learning to live with asthma, crossed finish line with inhaler in hand as a happy finisher.

Not sure how I’ll get back to completing full distance but need to keep trying. I’ll find a way, albeit a slow one.

Now I need to work out what went wrong with my google, check the bikes not been shaken to bits and embrace my aches & pains of pride ! Rest day for a few days for me and lots of eye wash.

Catching up on kit washing I had a few stowaways in the machine – inhalers, Oakleys & medal ! 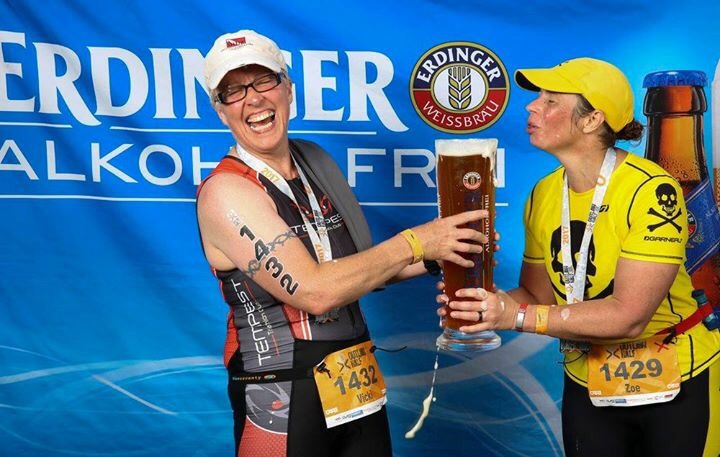 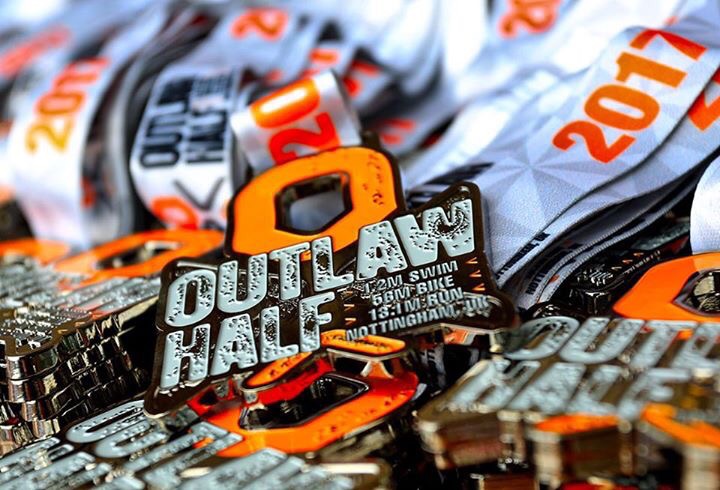 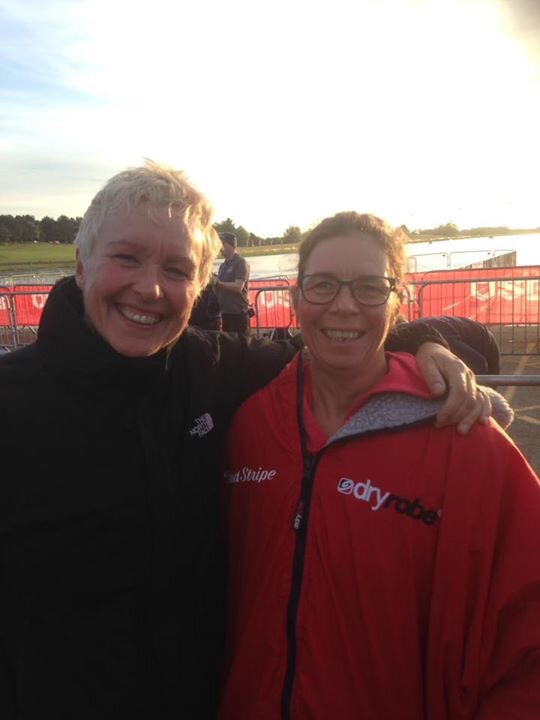 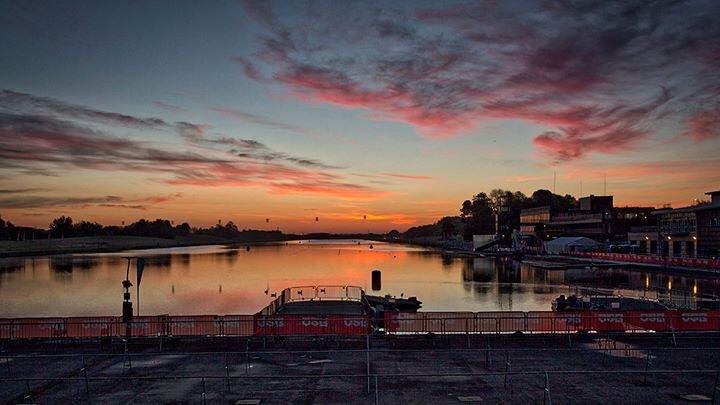 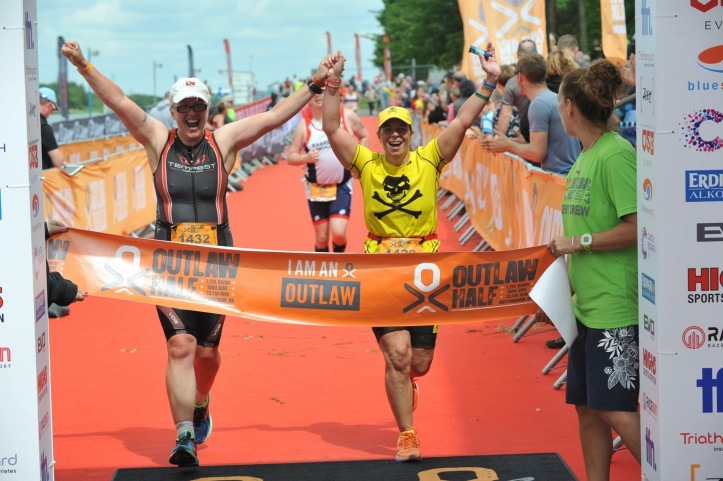